The Forth Bridge is one of Scotland’s most famous icons spanning a total length of 2467 metres (1.5 miles) over the Firth of Forth. After 8 years of construction the bridge was completed in 1890 and is one of the most recognised engineering accomplishments of the Victorian era. In 2015 the bridge celebrated its 125th year and was the 6th Scottish entry into the UNSECO world heritage list alongside other world sites such as; Stonehenge (listed 1986), Taj Mahal (listed 1983) & The Great Wall of China (listed 1987).

The bridge was originally being designed by North British Railway engineer Thomas Bouch. However, after Bouch’s Tay Bridge collapsed in 1879 (possibly due to high winds) confidence in his Forth Bridge proposal was lowered and the engineers; Sir John Fowler, William Henry Barlow and T.E. Harrison were invited to submit proposals for the bridge.

The bridge was finally designed by English engineers Sir John Fowler and Sir Benjamin Baker and constructed primarily by Scotsman Sir William Arrol and Company. They decided to construct a cantilever bridge and at the time it was the longest single cantilever bridge span in the world with two separate spans of 521 metres (1710 feet). Today it is the second longest behind the Quebec Bridge in Canada which was built in 1917 and spans 549 metres (1800 feet).

Forth Bridge under construction circa 1888

The Forth bridge was the first major steel based construction project in Great Britain. Up until 1877 steel had been used only as a limited resource in structural engineering because of the fluctuations in quality and strength due to the production processes used. The two main suppliers of steel for the Forth Bridge were Frederick and William Siemens from England (who had introduced the technique for consistent quality steel) and Pierre and Emile Martin from France (who had improved upon the Siemens brothers techniques). 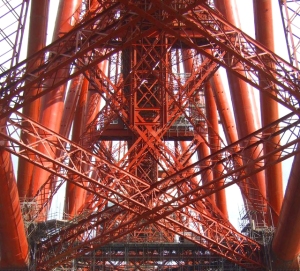 In 2002 Balfour Beatty was awarded a £130 million contract to fully repaint the bridge, a process which took 10 years. Making use of up to 4000 tonnes of scaffolding at any one time vast sections of the bridge were encapsulated in specially controlled environment to create the correct conditions for painting. Before painting began all previous layers of paint were removed back to the original steel framework which allowed any necessary repairs to be made. The paint colour was carefully matched to suit the previous “Forth Bridge Red” and 120,000 litres was required to apply three coats to the bridge in a technique used on oil rigs in the North Sea. Usually the paint would cost £6 per Sq/m to apply to a wall in your home, but due to the specialist techniques and conditions used the cost was around £370 per Sq/m.

The old myth of “painting the Forth Bridge is a never ending task” was finally dispelled as the current finished paint job should last for at least 20 years.

After 126 years of use the bridge is still a major railway asset and the only rail bridge to span the Firth of Forth. In 1907 the bridge carried an estimated 30,000 passenger trains, whereas in 2000 the bridge sustained 54,080 passenger trains as well as 6,240 freight trains, proving that Victorian engineering in Great Britain was forward thinking, designed and built to sustain the test of time.

Image Sources:
Inner Tensions and Compressions by Simon Johnston 2009
Forth Bridge Under Construction circa 1888 by George Washington Wilson
Cover Image by EG Focus on Flickr